Britain’s Prince William, the Duke of Cambridge, is going back to work, taking on a new role as an air ambulance pilot.

The duke will start training in September, a year after leaving the Royal Air Force, where he flew search and rescue helicopters. He will have his first air ambulance shift in spring 2015.

It’s the first time a royal who’s in direct line to the throne has taken a civilian job. The East Anglian Air Ambulance is operated by a private company, Bond Air Services, but the Duke will donate his salary to charity.

He’ll be based near his country home on the Queen’s Sandringham Estate, which should allow him to remain a hands-on dad to his one-year-old heir Prince George.

A palace spokesman said Prince William was “hugely excited and motivated” by his new job.

“The Duke sees this as a true form of public service, helping people in their most difficult times,” the spokesman said. “He regards his work with the RAF search and rescue force as having been an exceptional privilege and the Duke wanted to make his own contribution to the outstanding work of the air ambulance service.” 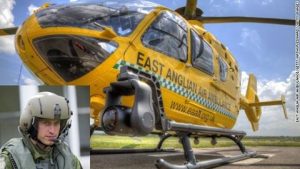